10 Things to Try Instead of Slides 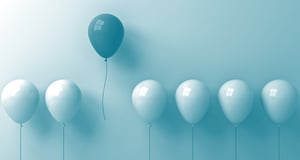 We can't help it. We do decks because it's the convention, and because it feels better than going against the grain. But when's the last time you really nailed it because of the quality of your slides? And are you sure that's what deserves the credit?

At GatherRound, we see the deck as a last resort. A tactic only to be deployed when we're 100% certain it's the appropriate medium. But we'd be remiss to leave it at that. Below are 10 of the most common (because they're effective) alternatives we recommend to accomplish similar results with our clients and their audiences:

The presenter's responsibility is not only to entertain, but also to bring the audience on a journey that creates contrast between a before and after state. The greatest change agents in history understand this, and today's best presenters are change agents. Simple story structures can make the difference between confusing and convincing.

2. Put it on the whiteboard

The best slide decks unfold our content rather than spilling it all out at once. But even the best slide decks will never be as interactive as scribbling, drawing, erasing and drawing again. Bring the audience with you as you punctuate what you say with what you write, not what you click.

Need to generate a bunch of tactics? Don't do slides. Having to access visual information like text and images while listening to a meeting host paralyzes participants. Our brains simply don't have the cognitive power to ingest 2 streams and produce ideas simultaneously. Instead, consider a physical stimulus, like a tennis ball, paper clip, refrigerator (we've actually seen this work!), or other tactile inspiration for idea generation.

Human behavior revolves around 2 questions: "What's expected of me?" and "How am I doing against that expectation?" Our audiences wonder that as well, but left to our own devices, we'll turn to just that: Our own devices. Help your audience understand where they are in the timeline of your talk by outlining your story on a placemat. At any time, they'll be able to glance down and see the progress you've made together. Yes, it breaks eye contact, but that's necessary and refreshing at times. And it's not anywhere near as distracting as the almighty smartphone.

Sometimes, deck addicts prepare decks as a gesture of gratitude. For example, using slides to recap elements of a successful campaign or preparing a deck introducing the employee of the month. Our intentions are pure, but let's keep in mind 46% of our audiences aren't listening to a word we say when we present slides (Prezi). Want to say thanks? Host a cookie party. Audiences prefer cookies over slides (surely there's research out there that could validate this). Plus, giving them something to do with their hands can help prevent device anxiety long enough to address the room.

Wear it for the afternoon. Make it intriguing. Get people to ask what it's for. Then give them one. Before you know it, you will have built a stable of evangelists far more powerful and capable of creating change than if you had spent that time on slides instead.

Ask someone what she's working on. Ask about her hometown. Ask more questions. Soon, you'll find yourself having what's called a "conversation." It feels good when someone is genuinely interested in us, and no degree of deck preparation can possibly recreate that.

Never prepare slides without a complete understanding of your audience. The conduit for communication is empathy, and empathy is established by asking questions of each other. Surveys are great tools for kicking open the lines of communication in low-risk ways. Can't get that investor on the phone? Send her team a survey in advance of your meeting. You may learn something that strikes the traditional pitch deck from your agenda in favor of something far more meaningful.

With 500 million active PowerPoint users creating 30 million decks daily (Microsoft), the odds are in your favor that someone has already created your content. It's the information age. There's no shame in repurposing content, as long as it's attributed and shared with the author's original intent. Don't waste your time. Leverage someone else's. Then go have another cookie.

Plant a tree. Dig a hole for a time capsule in homage to your project. Have a "ground-breaking" ceremony, or paint a mural in honor of what the world looks like once your initiative reaches total buy-in. Put an empty fishbowl in the break room and ask your teammates to collect bottle caps, seeds, coins, or another form of token that's conceptually connected to your idea. Monuments don't have to be monumental in size to be meaningful. But when celebrated ceremoniously, they can remind us how important this project is.

When's the last time a deck did that for you? Put down the deck and make something that matters. Still stuck? Get in touch.